Myer Horowitz has built a career, and a legacy, in education. Through professional commitments and extensive volunteer work, he has provided guidance and insights to programs from kindergarten to post-secondary.

Born in Montreal, Que., Myer started his professional career as a teacher in elementary and secondary schools. He joined the Faculty of Education at McGill University in 1960, before moving to the University of Alberta in 1969. There he served as vice-president (academic), dean of education, and professor and chair of the Department of Elementary Education. He was the president of the university from 1979 to 1989, and was named president emeritus in 1999.

Myer remains active in post-secondary education. He is the chair of Royal Roads University’s Research Ethics Board, an adjunct professor of education studies and a member of the advisory board in the School of Communication and Culture. He continues with the University of Alberta as a special adviser to the Centre for Research for Teacher Education and Development.

He is also an adjunct professor of education and leadership studies at the University of Victoria. He is the acting director of the Centre for Early Childhood Research and Policy. He is a research associate in the Centre for Youth and Society and is the past chair of its advisory board. As well, he is a member of the advisory committee for the Family Centre.

Myer is active in his communities, with appointments in Edmonton and Victoria including work with the Winnifred Stewart Foundation, the Child and Adolescent Services Association, Success by 6, the Salvation Army, Goodwill Industries and the YMCA.

The University of Alberta posted the following obituary for Dr. Horowitz
https://www.ualberta.ca/folio/2022/10/former-u-of-a-president-myer-horowitz-remembered-as-exemplary-leader-and-scholar.html

Former U of A president Myer Horowitz remembered as exemplary leader and scholar
October 26, 2022 By Bev Betkowski 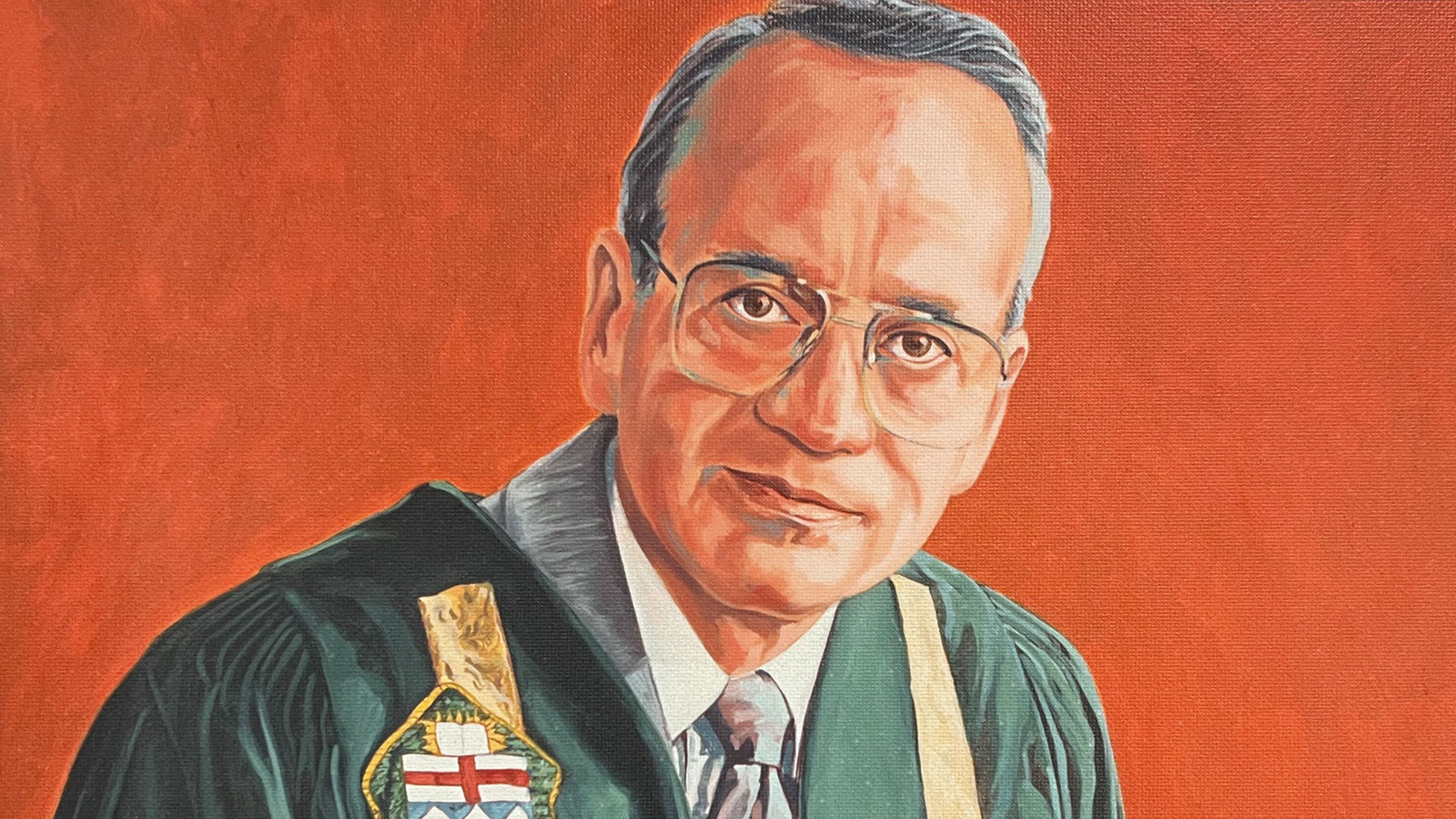 As the university’s ninth president from 1979-89, Horowitz was known for his devotion to education and endearing personal touch.

Myer Horowitz, who served as the University of Alberta’s ninth president from 1979-1989 and was known for his personal leadership style and dedication to teacher education, has passed away at the age of 89. (Photo: Faculty of Education)

Myer Horowitz, who served as the University of Alberta’s ninth president from 1979-89, has passed away at the age of 89.

Horowitz will be remembered for his leadership, his scholarly work devoted to teacher education and his personal touch on the campus he served.

“Myer Horowitz’s passing is a loss that reverberates across Canada,” says U of A president Bill Flanagan. “He was an influential and dedicated educator and an exemplary academic. The University of Alberta is grateful for his visionary leadership and deep commitment to build a better and more just world. He inspired those he met and left an enduring legacy of what was possible.

“On behalf of the University of Alberta community, I send my condolences to his family and many friends. We have lost a remarkable man.”

One of his goals as a new president, Horowitz reflected in 2015, was to introduce himself to the university’s community.

“The main purpose was, even though a lot of people knew me because I filled other administrative positions at the U of A, was to help people see what makes me tick both as a human being and as a professional, and provide some insight into how I would handle the presidency.”

One of his habits was to send handwritten notes, which endeared him to staff and students, according to the U of A history book, I Was There.

“He knew the institution inside and out and is fondly remembered by hundreds of staff and students as the president with a personal touch,” wrote author Ellen Schoeck. “No one who received a handwritten note from him has forgotten it.”

Born in Montreal in 1932, Horowitz took his teacher’s training at McGill University and eventually earned a master’s degree in education from the U of A in 1959, followed by a PhD in education from Stanford University in 1965. Horowitz then taught as a professor and became assistant dean in the Faculty of Education at McGill University, before accepting a position of chair of the Department of Elementary Education in the U of A Faculty of Education in 1969.

The first president to rise through the full ranks of the university, Horowitz also served as dean of the Faculty of Education from 1972 to 1975 and vice-president (academic) from 1975 to 1979 before becoming president.

In his role as president, Horowitz led the U of A through many years of tight provincial budgets, while managing to still develop the campus. During his time as president, the U of A partnered with the city and the province to bring the World University Games to campus in 1983, scoring the university international prominence and leaving a legacy of improved and new facilities, including one of the most distinctive, the Butterdome. The SUB Theatre, opened in 1967 within the Students’ Union Building, was renamed the Myer Horowitz Theatre in 1989 to honour the outgoing president.

Throughout his academic career and as a scholar, Horowitz was deeply committed to teacher education.

He was involved with programs, practices and policies around teacher education and during his tenure as president, he continued to teach a doctoral seminar.

“Myer was a visionary, and his leadership and passion for education has left a lasting legacy,” says Jennifer Tupper, dean of the Faculty of Education. “I was blessed to have many conversations with Myer over the last three years and will deeply miss his wise counsel and friendship.”

Horowitz broke ground as a master’s student at the U of A by focusing his thesis on education supports for mentally disabled children, along the way becoming a lifelong ally of Winnifred Stewart, an Alberta advocate who pioneered educational rights for disabled youth and their families.

In 1991, Horowitz was instrumental in establishing the faculty’s Centre for Research for Teacher Education and Development (CRTED), which is supported by the Myer Horowitz Endowment Fund. The fund also supports the Horowitz Teacher Education Education Post Doctoral Fellowship, allowing post-doctoral fellows from around the world to participate in CRTED research projects. In 1994, with his support, the Faculty of Education established the Horowitz Institute to promote professional development, focusing on policy issues in education.

He remained involved in the CRTED’s ongoing work until as recently as this summer, participating in monthly research issues sessions and adjudicating the 2021 winner of the Outstanding Doctoral Dissertation in Teacher Education in the Faculty of Education, an award supported by his namesake endowment fund.

Horowitz received an honorary doctor of laws degree from the U of A in 1990, and was named an officer of the Order of Canada in the same year.

The Globe and Mail posted the following obituary on October 29, 2022:
https://www.legacy.com/ca/obituaries/theglobeandmail/name/myer-horowitz-obituary?pid=203097947

MYER HOROWITZ, OC Myer Horowitz died peacefully on October 24, 2022, in Victoria, British Columbia, at the age of 89. The third child of Fanny and Philip Horowitz, Myer was born in Montreal. He attended the School for Teachers at McDonald College (now part of McGill University). He began his career in 1952 as an elementary school teacher in Montreal and felt that his time teaching at Victoria School was the highlight of his long career in education. Myer attended night school at Sir George Williams College (now Concordia University) graduating with a Bachelor of Arts in 1956, the same year he married Barbara Rosen, also of Montreal. Myer went on to earn his master’s degree from the University of Alberta in 1959 and his doctorate from Stanford University in 1965. Myer was on faculty at McGill from 1960 until 1969 when he and Barbara and their two daughters moved to Edmonton where he held numerous positions at the University of Alberta, ultimately serving as president from 1979 to 1989. Following his retirement, Myer and Barbara moved to Victoria in 1998 where Myer became associated with Royal Roads University and the University of Victoria. Always passionate about education, Myer continued mentoring students and advising and consulting on various committees until the day he died. Myer was predeceased by his parents, and his brothers, Sol and Isadore. He is survived by his wife, Barbara; his daughters, Carol and Deborah; and by his sister, Ida (Gold); as well as his sisters-in- law, Lillian and Jean; and numerous nieces and nephews. The family would like to thank Dr. Christine Roh and the nurses of the Vancouver Island Health Authority who were so attentive to Myer over the last several months. According to his wishes, a small graveside funeral was held in Victoria.